Gas prices are still floating at their highest levels in nearly a decade as new data shows that fuel demand reached a pandemic high last week amid resurgent consumer travel and crippling gas shortages that many Southeast states are still facing, but experts think prices could go down again in the next few days. 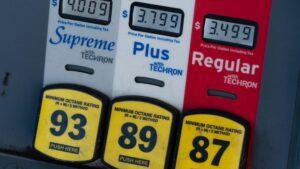 A gas pump shows prices exceeding four dollars a gallon in Atlanta, Georgia, on May 13—five days after a criminal hack shut down deliveries of almost half the gasoline and diesel burned in the eastern U.S./Photo: Bloomberg Finance LP

Despite the widespread shortages sparked by Colonial Pipeline’s five-day shutdown, gasoline demand in the U.S. hit a new pandemic high last week, rising 0.6% from the prior week amid an uptick fueled by an influx of businesses reopening, according to GasBuddy data released Sunday.

Meanwhile, average U.S. gas prices also soared, passing $3 per gallon for the first time since 2014 on Wednesday and steadily climbing every day since, reaching about $3.04 on Saturday, according to data from both GasBuddy and AAA.

Gas prices have climbed roughly 18 cents over the past month nationwide, according to AAA, but southeastern states hard-hit by the recent shortages have seen even starker declines, with prices in North Carolina—where 59% of gas stations are still out of gas—rising by more than 30 cents per gallon over the past month.

There have, however, been promising developments: All but three of the 16 East Coast states affected by the pipeline shutdown saw gas shortages improve or stay the same on Saturday, which also marked the third-straight day of falling fuel demand nationwide.

In a Sunday email, Patrick De Haan, the head of petroleum analysis at GasBuddy, said he expects prices could fall back under $3 per gallon in the next week or so as price increases in some areas of the Southeast decline thanks to Colonial’s resumption of operations.

“The shutdown has contributed to increases in gas prices, which were already rising due to higher crude prices and demand ahead of Memorial Day,” a AAA spokesperson wrote in a Sunday email. “Price increases related to the cyberattack have mostly been in the impacted areas on the east coast, but … it is important to note that the driving factor behind more expensive gas prices is fluctuating demand.”

Nationwide fuel demand jumped nearly 20% on Monday, according to GasBuddy, as spooked consumers flocked to gas stations on the third day of Colonial’s shutdown. On May 7, Colonial learned that it was the victim of a cybersecurity attack and took its systems offline “to contain the threat.” Part of an online hacking group called DarkSide, the hackers took nearly 100 gigabytes of data from Colonial on Thursday and then demanded a ransom of roughly $5 million, which Colonial ultimately paid in bitcoin. The company ended up restarting its operations on Wednesday.

37 million. That’s how many Americans are expected to hit the road on Memorial Day weekend, an increase of more than 60% from last year, when only 23 million Americans traveled, according to AAA.